ST. MARY OF THE SNOWS 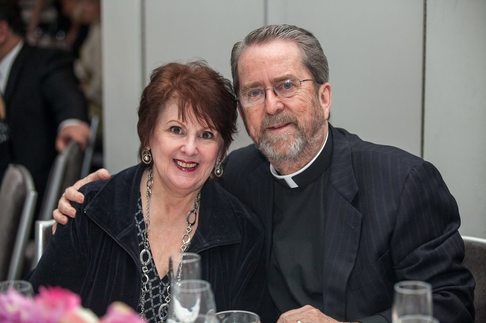 ​Father Jim Fosdick met his wife Susan in high school in Madison Wisconsin and they were married while attending the University of Wisconsin in Madison. They have three children—Jimi, Christopher and Jennifer. Jim and Susan have 5 grandchildren—Jaz, Sophie, Isabella, Luke, and Lucy. Father Fosdick had quite a varied career before responding to a call to ordained ministry. Fosdick began his career in state government and was staff director for the Lt. Gov. of Wisconsin. He moved to Washington D.C. where he worked as a management consultant for three years. He then went to work at the National Institute for Advanced Studies where he first served as Assistant Director for Health Policy Research and eventually as Director of the Institute.

Immediately prior to beginning ordained ministry Fosdick was an investment banker; first with Prudential Bache Securities and then with Morgan Stanley Van Kampen Funds. In 1997 he started his own firm, Wall Street Asset Management, Inc. working for both financial institutions and individuals. One of WSAM’s larger assignments was serving as advisor to the SEC in the takeover of three defaulted mutual funds.

Fosdick was ordained a deacon February 1 2003 and has served as deacon at St. Mark’s Episcopal Church in Glen Ellyn Illinois, Church of the Blessed Sacrament in Green Bay Wisconsin and St. Andrews Episcopal Church in El Paso, IL. He was also one of the founding members of All Souls’ Anglican Church in Wheaton, IL. He attended Nashotah House, an Episcopal seminary in Nashotah, Wisconsin. Fosdick was ordained to the priesthood by Bishop Keith Ackerman at St. Paul’s Cathedral in Peoria WI on Sept 2, 2006. The Rev Jim Fosdick became the rector of St. Mary of the Snows Anglican Church in Eagle River, Wisconsin on October 15, 2006. He notes, “Jesus Christ completely transformed my life March 17, 1990 when I was saved, and my mission now is to bring others to know Him and to help them grow in faith as disciples.”

Fosdick said he would characterize himself as an evangelical, Anglo-Catholic, charismatic. Evangelical because bringing people to a saving knowledge of Jesus Christ is his primary passion. Anglo-Catholic because he loves the historic liturgy of the church which goes back to the earliest days of Christianity. Charismatic because he seeks the guidance and empowerment of the Holy Spirit in everything he does. Fosdick also said that healing by the power of the Holy Spirit has always been part of the Christian church and is something he’s deeply committed to preserving and growing at St. Mary’s.

“Being called as parish priest for St. Mary’s is truly God giving me the desire of my heart”, Fosdick said. Fosdick said he firmly believes that God gives people the desires of their hearts if they follow Jesus. First though He changes their hearts to conform to His. Fosdick said he has been impressed by what a wonderful faithful and loving community St. Mary of the Snows is. “Susan and I felt at home from the first day we met the folks there. We can’t imagine a group of believers we would more like to work with in spreading the Good News of Jesus Christ. At St. Mary’s we want to make disciples who make disciples. This is going to be fun.” 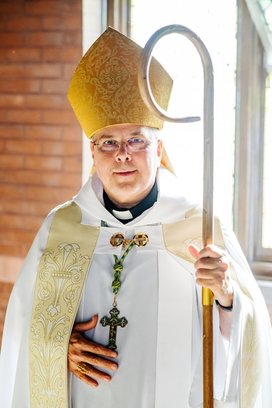 ​Spend any time with Bishop Alberto Morales and you’ll quickly learn a few things. The bishop brings it all back to following Jesus, and the bishop has a rich sense of humor. Laughter, music, good food, and an eye for mission follow Bp. Morales all the places his ministry take him.

Born on the south side of Puerto Rico, in the town of Yabucoa, Bp. Morales loved the church from a young age. As a child, he would pretend he was a priest for his cousins and family. Later he would frequent all of the churches in town, learning from and drawing from many expressions of our catholic Christian faith.

His call to ministry from that young age took Bp. Morales to the Carribean and Spain for seminary.

After seminary, Bp. Morales returned to Puerto Rico and founded St. Benedict’s Abbey as an ecumenical abbey, reflecting his deep understanding that all churches that profess Jesus is Lord are all part of the body of Christ.

In 1996 St. Benedict’s Abbey moved to Bartonville, Illinois at the invitation of Bishop Keith Ackerman. Bp. Ackerman and Bp. Morales met through the Anglican communion, and Bp. Ackerman welcomed the Benedictine monastic experience into the diocese.

After the Diocese of Quincy joined the Anglican Church in North America (ACNA) in 2009, the diocese voted Alberto their next bishop, and he was enthroned in 2010.